The Badlands of New Mexico 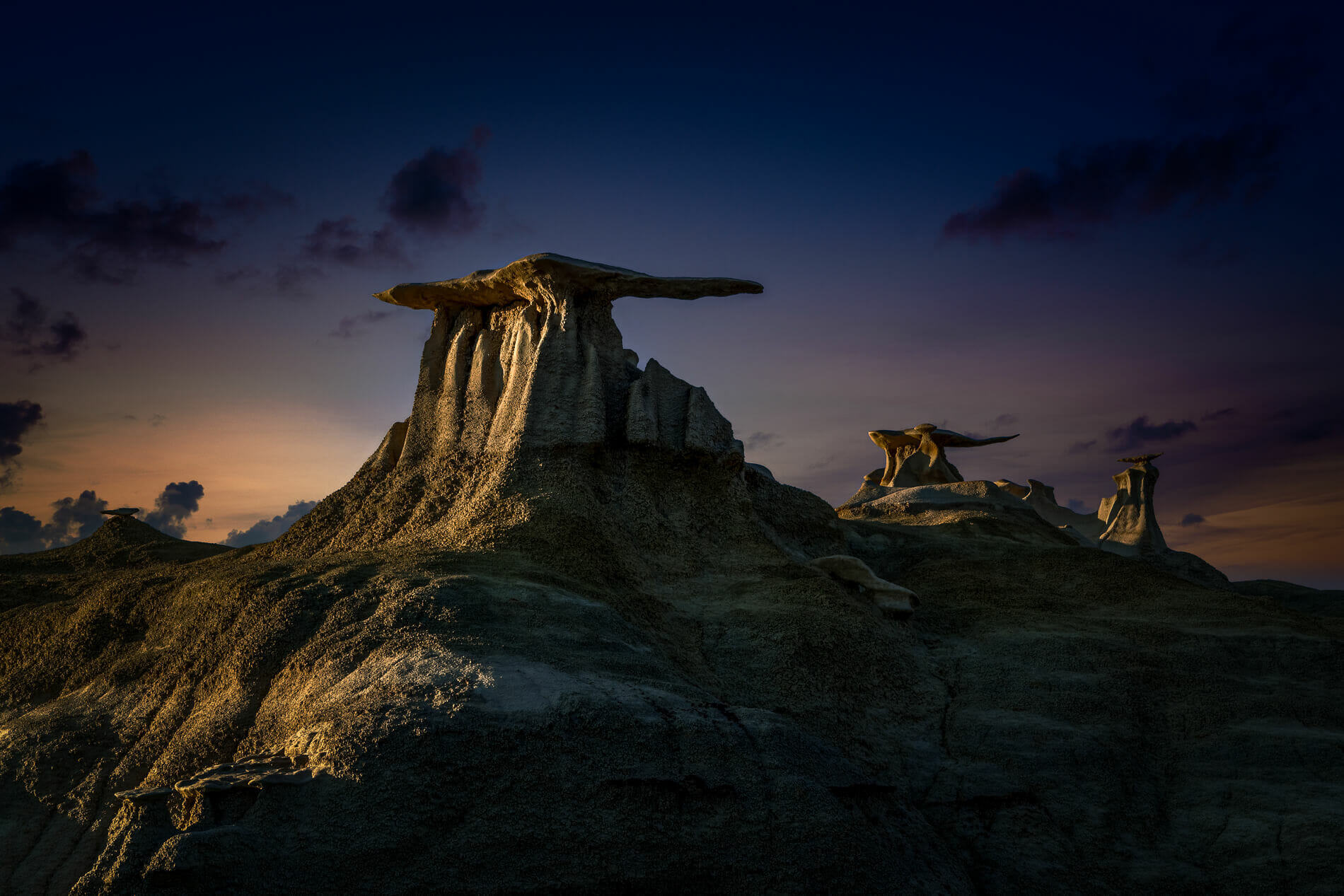 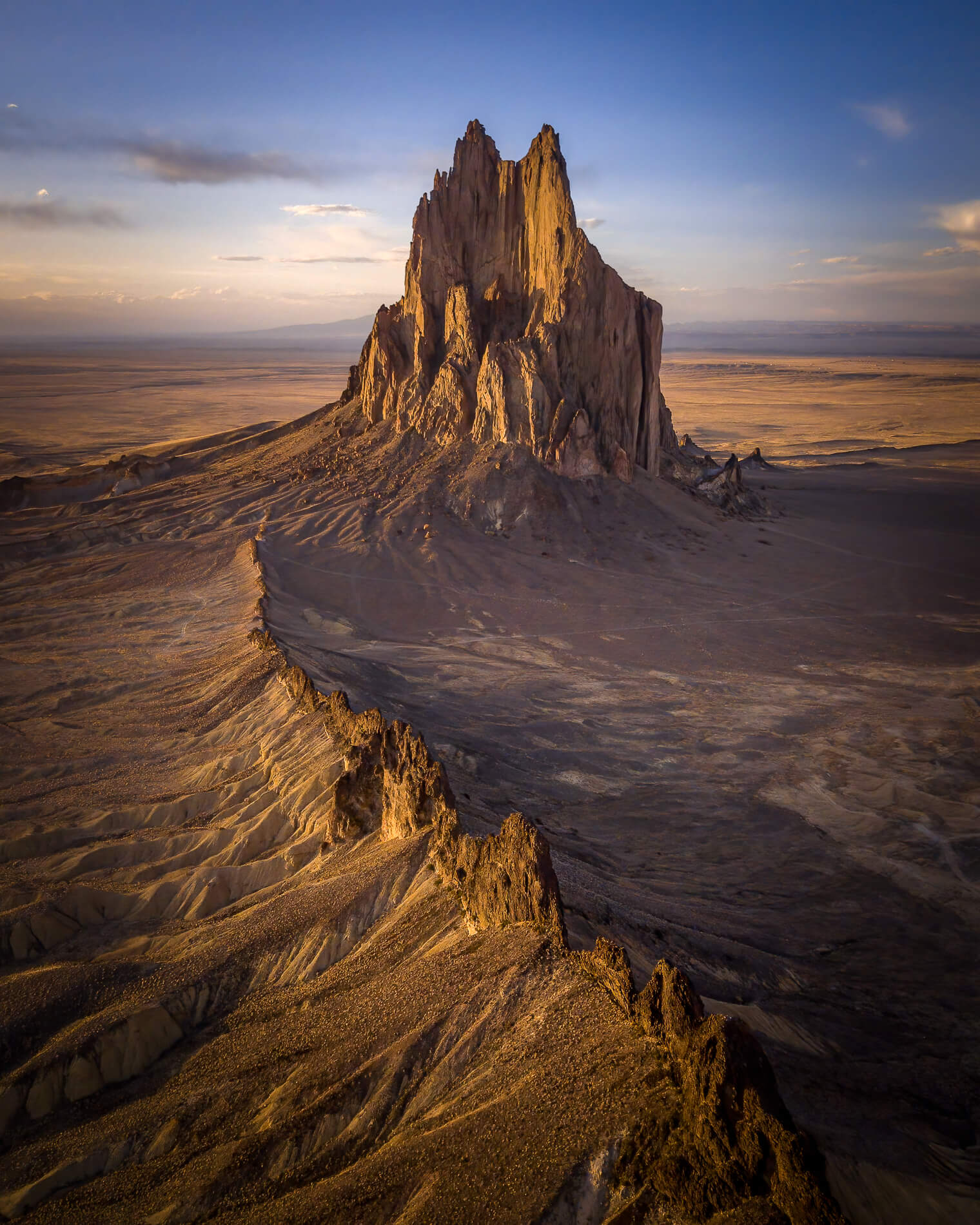 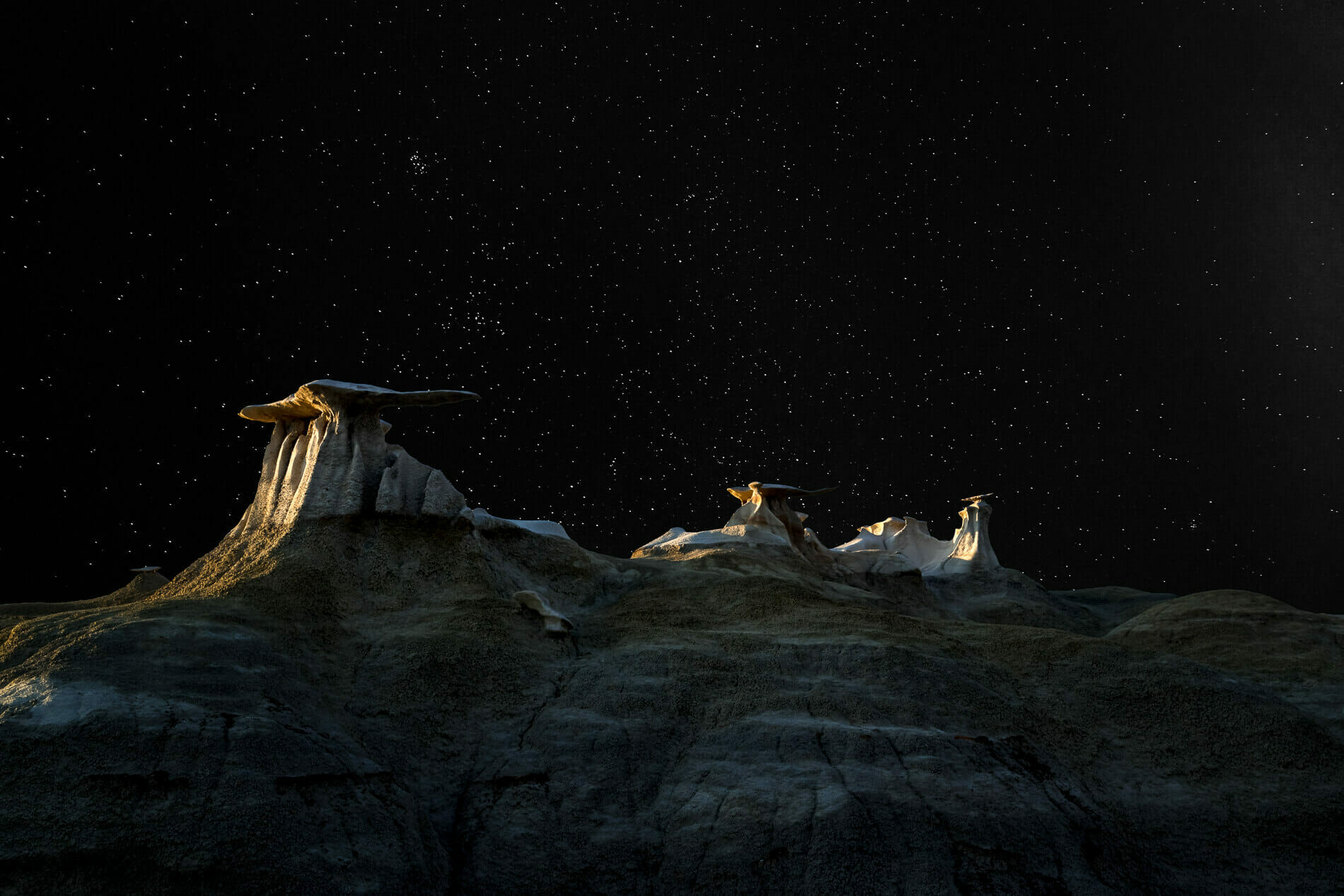 Meander through the endless hoodoos, desert spires, and incredible rock formations in the Badlands of New Mexico. This alien world was once a coastal swamp of an inland sea where dinosaurs roamed!

Suppose you’re a hiker, photographer, or nature lover. The Badlands of New Mexico is a once-in-a-lifetime experience that should definitely be on your bucket list.

Rising from the flat, dusty New Mexico desert, it’s hard to miss the imposing and mysterious Shiprock Pinnacle. This unique rock formation can be seen for miles and is known to the Navajo as “Tsé Bit’ A’í,” or rock with wings. The peak tip rests 7,178 feet above sea level. It is at the center of three volcanic pressure ridges that pushed the rock skyward millenniums ago. According to legend, the remains of the giant bird carried the Navajo from the north to New Mexico. As this rock formation is sacred to the Navajos – hiking and/or climbing on the sacred peak or surrounding rocks are forbidden.

Photographers, hikers, and explorers from around the world visit the Bisti Badlands to see the hoodoos, desert spires, natural arches, and fossils unique to this area. An early relative of Tyrannosaurus Rex, the Bisti Beast was discovered in 1997. This 30-foot tyrannosaur roamed the Earth around 74 million years ago and has only been found in New Mexico. The Bisti Beast is not the only specimen discovered within the Bisti. Researchers have found numerous other fossils, including the duck-billed dinosaur Parasaurolophus, a Pentaceratops, a giant sauropod named Alamosaurus, and innumerable turtles, fish, crocodiles, and other species.

The Bisti Badlands is the closest thing to Mars you’ll ever see. Although we’ll spend time exploring and photographing the endless hoodoos, desert spires, arches, and unique rock formations, we’ll focus our attention on three different areas of Bisti: the northern Bisti area where the Three Wings, Beige/Conversing/Vanilla Hoodoos, and Mantra Ray are located; the southern Bisti area where the Egg Hatchery, Hoodo City, and Bisti Arch are located, and the Valley of Dreams area where the Alien Throne and King of Wings are located.

The majority of our days will start early, before sunrise. After a quick coffee or tea, we’ll be off to get into position at a location in the best light of the day with breakfast in the field to maximize our shooting time. We’ll often continue until mid-to-late morning before heading back to Basecamp.

Back at Basecamp, we’ll have time for off-loading memory cards, classroom lectures & instruction, working on our images, one-on-one guidance, or time to relax. Then, in the mid-to-late afternoon, we’ll head out again to capture the evening skies, getting the most out of the sunset and shooting the stars in the night sky.

More important than just getting you to some of the best and most remote locations at the best times of the day, this five-day landscape photography workshop will teach you how to visualize an image, how to plan your shoot, how to capture your image in the field, and how to bring your image to life using a variety of post-production techniques.

We’ll learn how to scout and visualize a scene, compose a ground/sky/sea landscape to show scale and tell a story, how to manage complex highlight and shadow scenes, how and when to use filters, how to plan your images for a blended blue hour composite, how to focus your camera at night to capture pin sharp stars and foreground, and how to use apps like PhotoPills to plan a shoot. We’ll also use techniques such as dynamic bracketing and exposure blending, focus stacking and focal length blending, neutral density filters, and stacking for noise reduction.

We’ll spend time developing your post-production workflow – learning when Lightroom is enough and when you need to move your work into Photoshop. We’ll learn how to use techniques such as luminosity masks to create and solve contrast, color, and blending issues; how to blend multiple images together in Photoshop to create blue hour blends, focal length blends, and exposure blends; how to use start stacking to create pin sharp starry night skies; how to create Orton glows and sharpen your final image; and how to use apps like ProPanel to increase your efficiency.

You’ll benefit from hours of capture time in the field with an instructor by your side, and classroom instruction as you learn new techniques and strategies for creating dynamic images.

What’s Included in Your Tuition:

What’s Not Included in Your Tuition:

What to Bring and How to Prepare for Your Workshop

Please see our How to Prepare For Your Workshop page for guidelines on workshop prep, gear, and packing. Approximately 90 days before your workshop, you will be sent a PDF with more specific instructions.

1 review for The Badlands of New Mexico