The Seascapes of the Rugged Oregon Coast 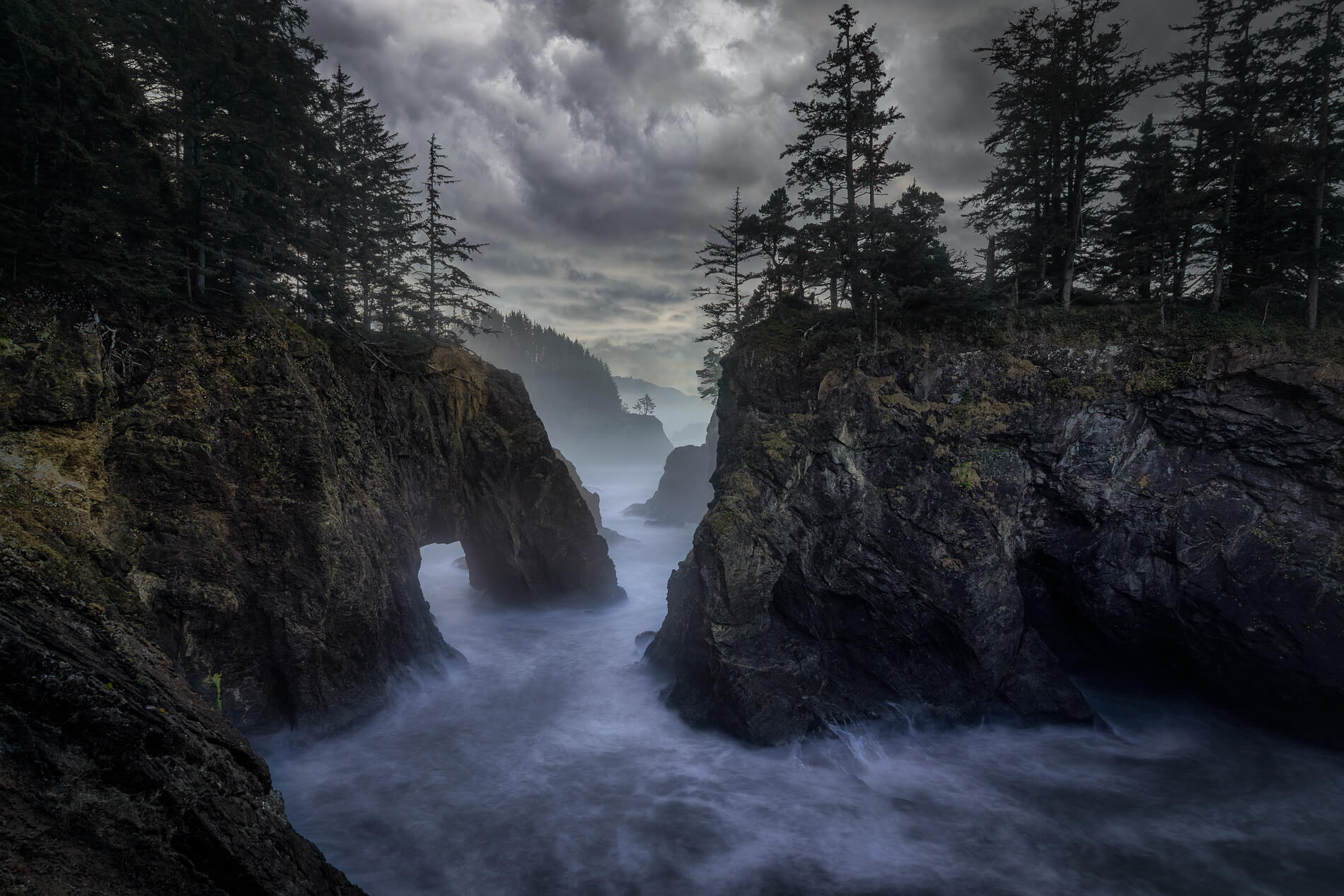 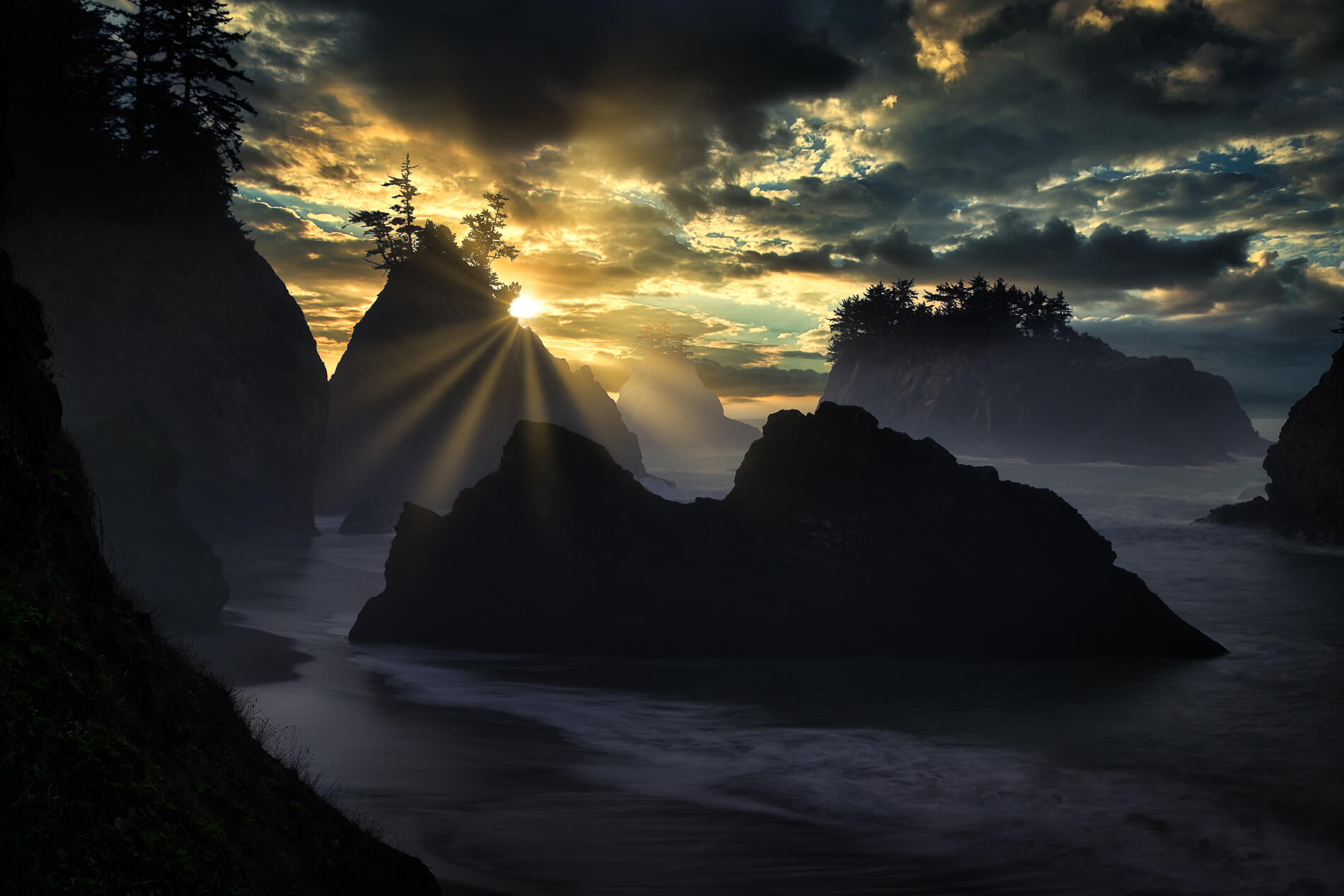 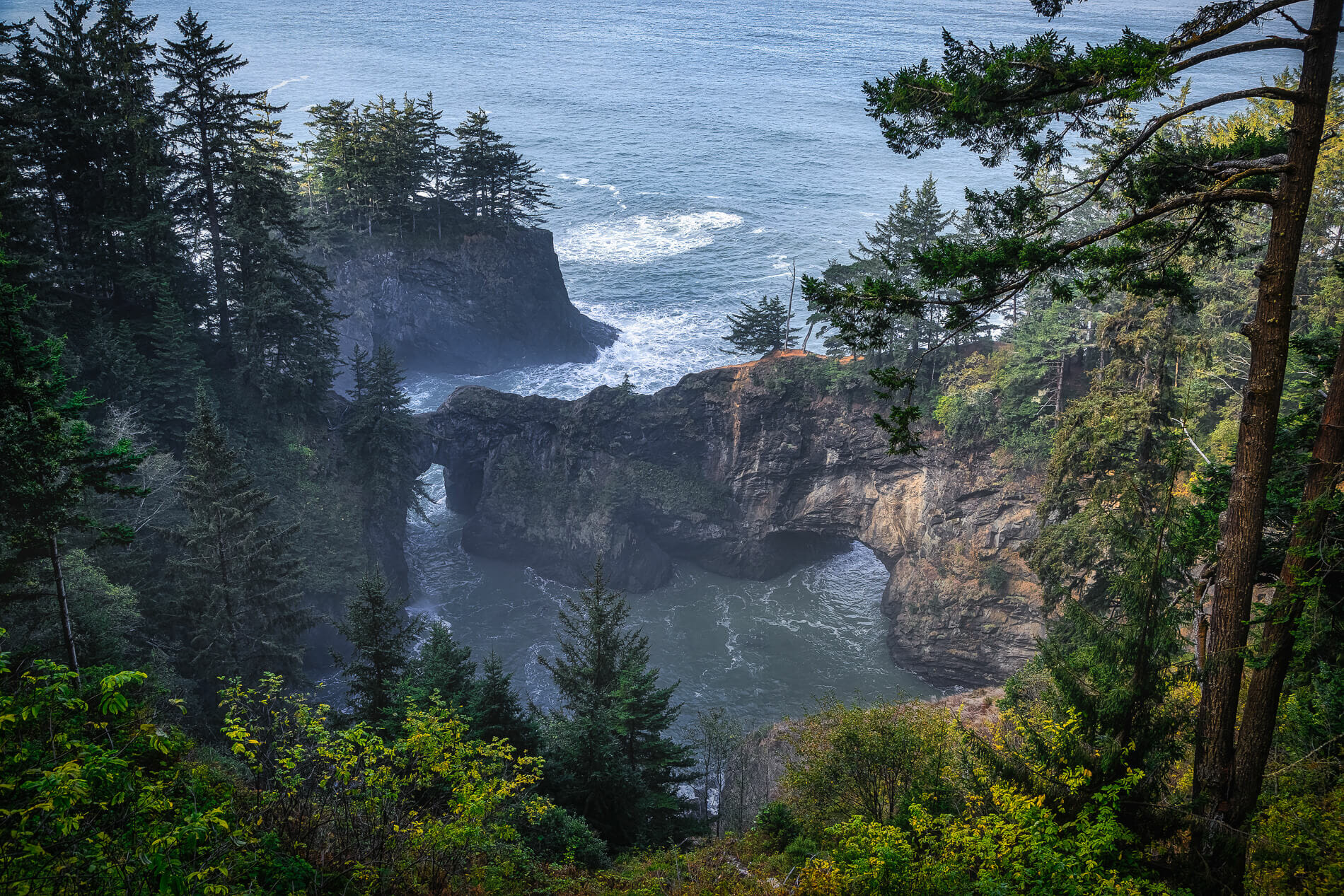 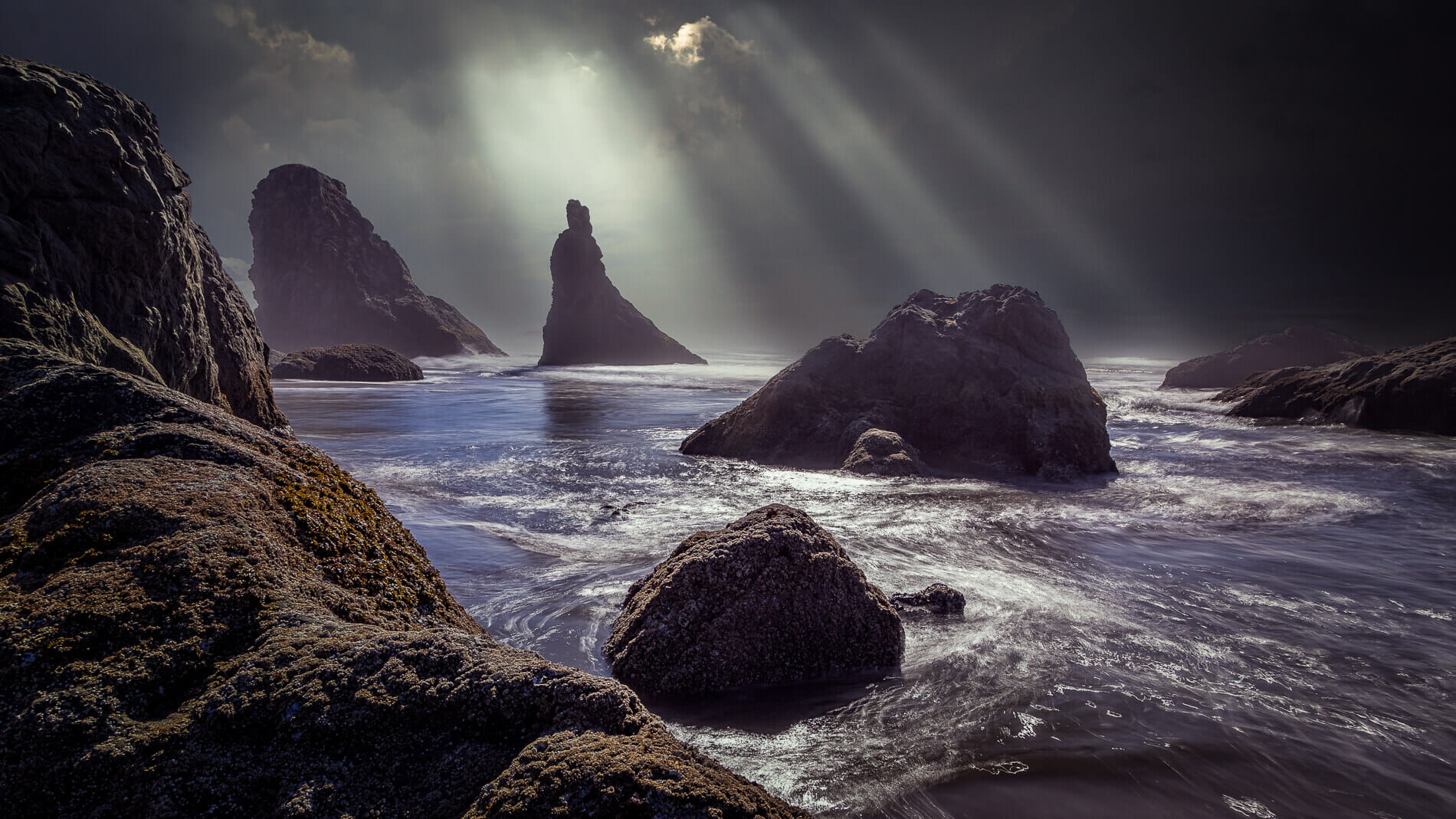 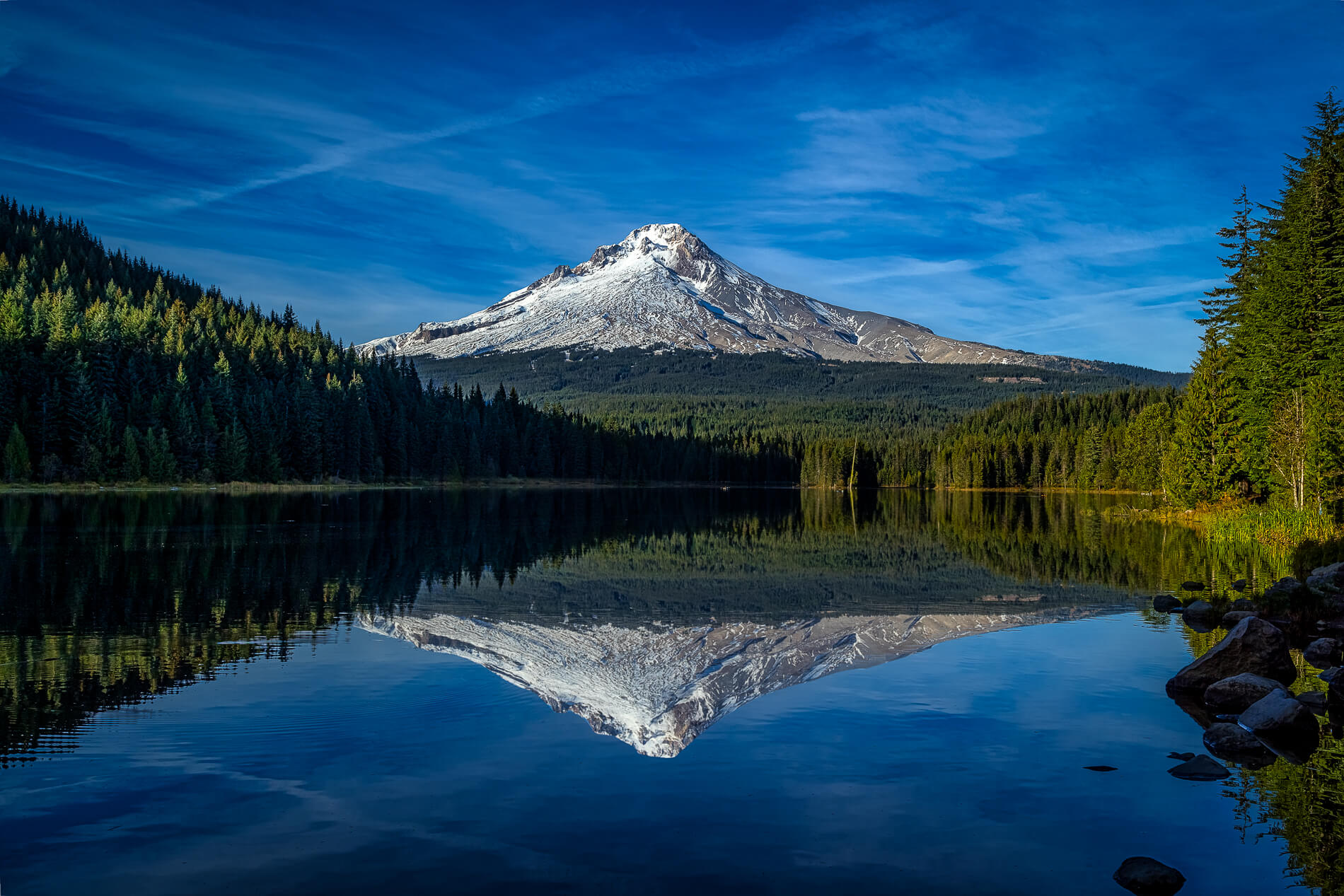 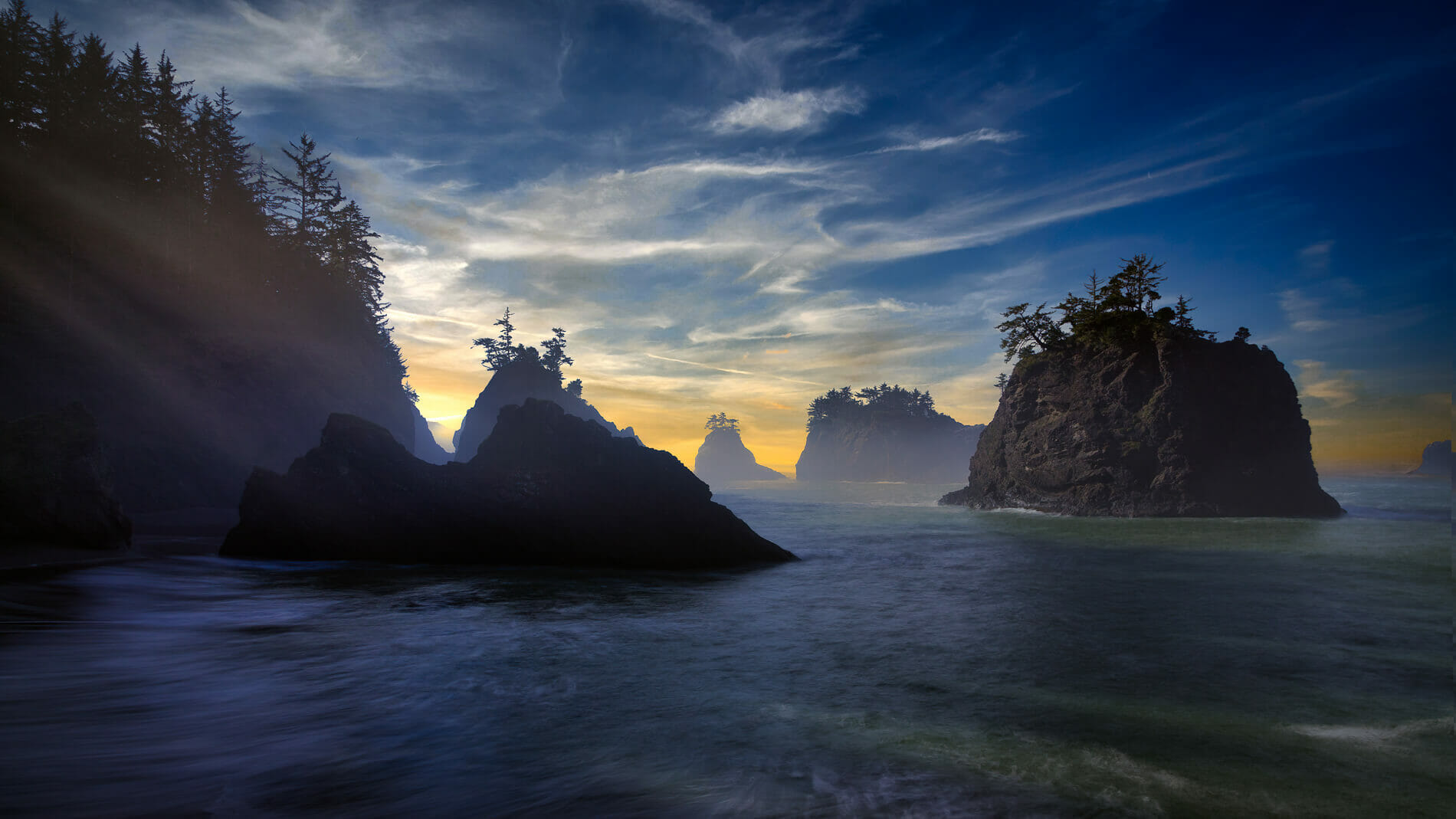 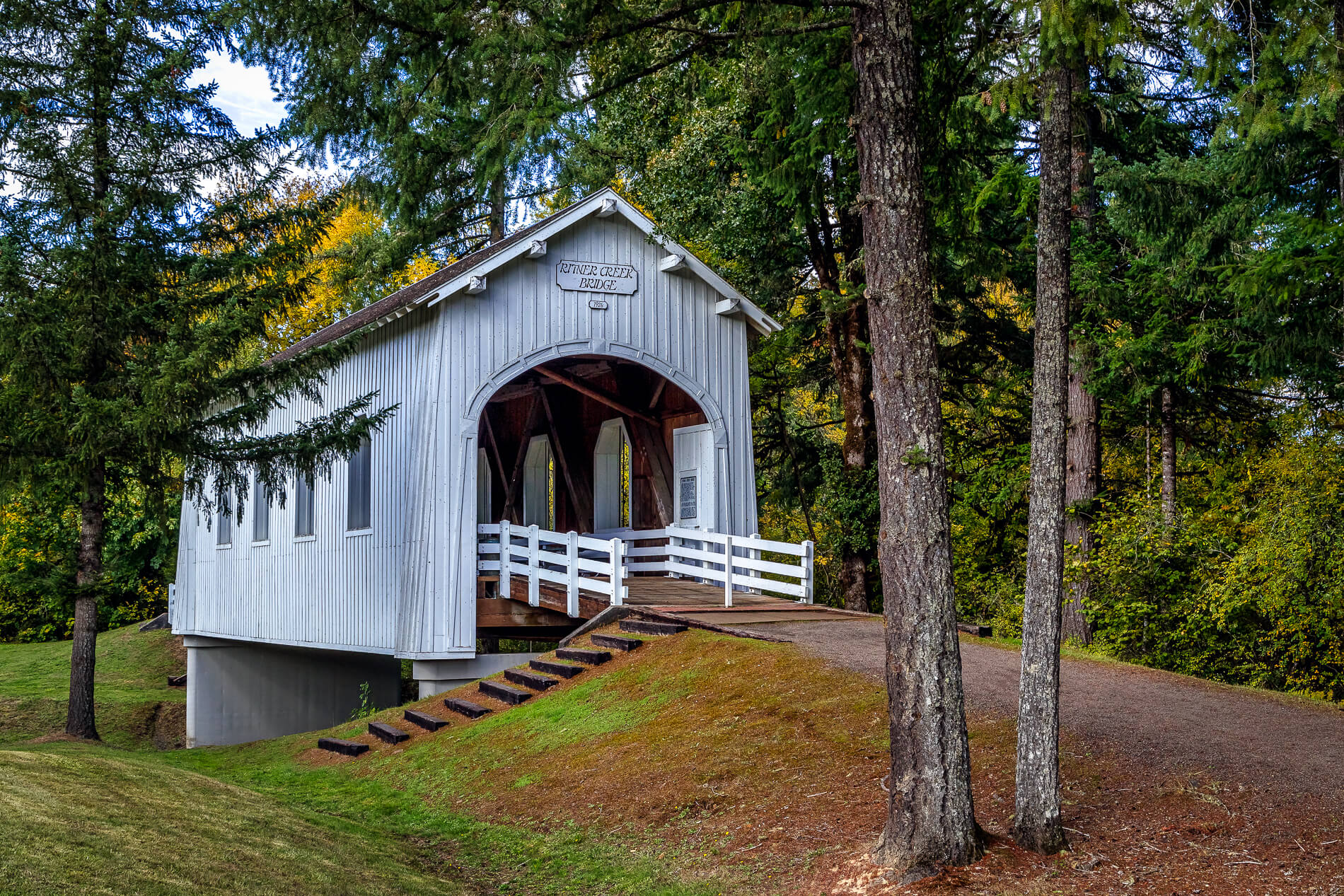 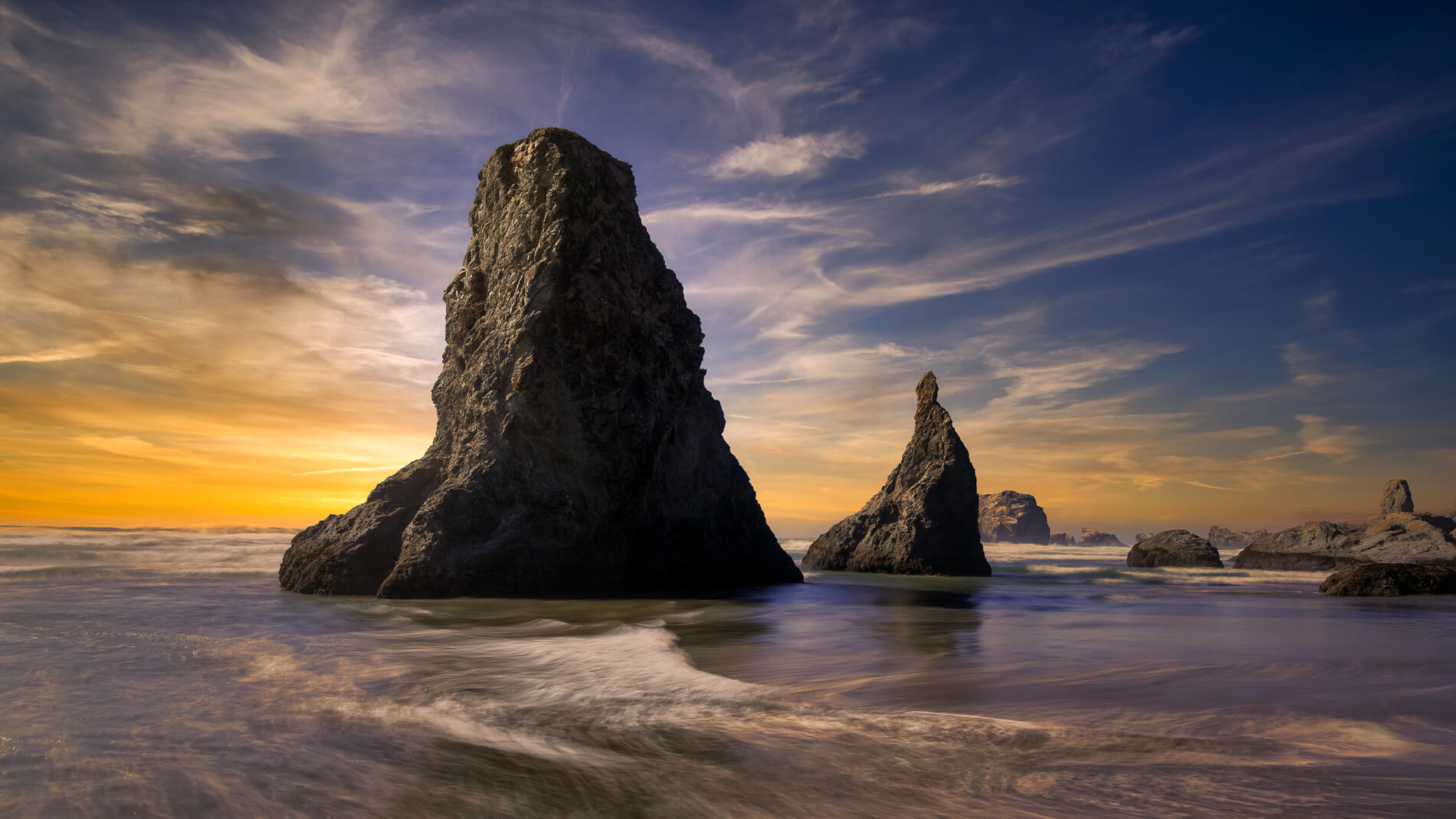 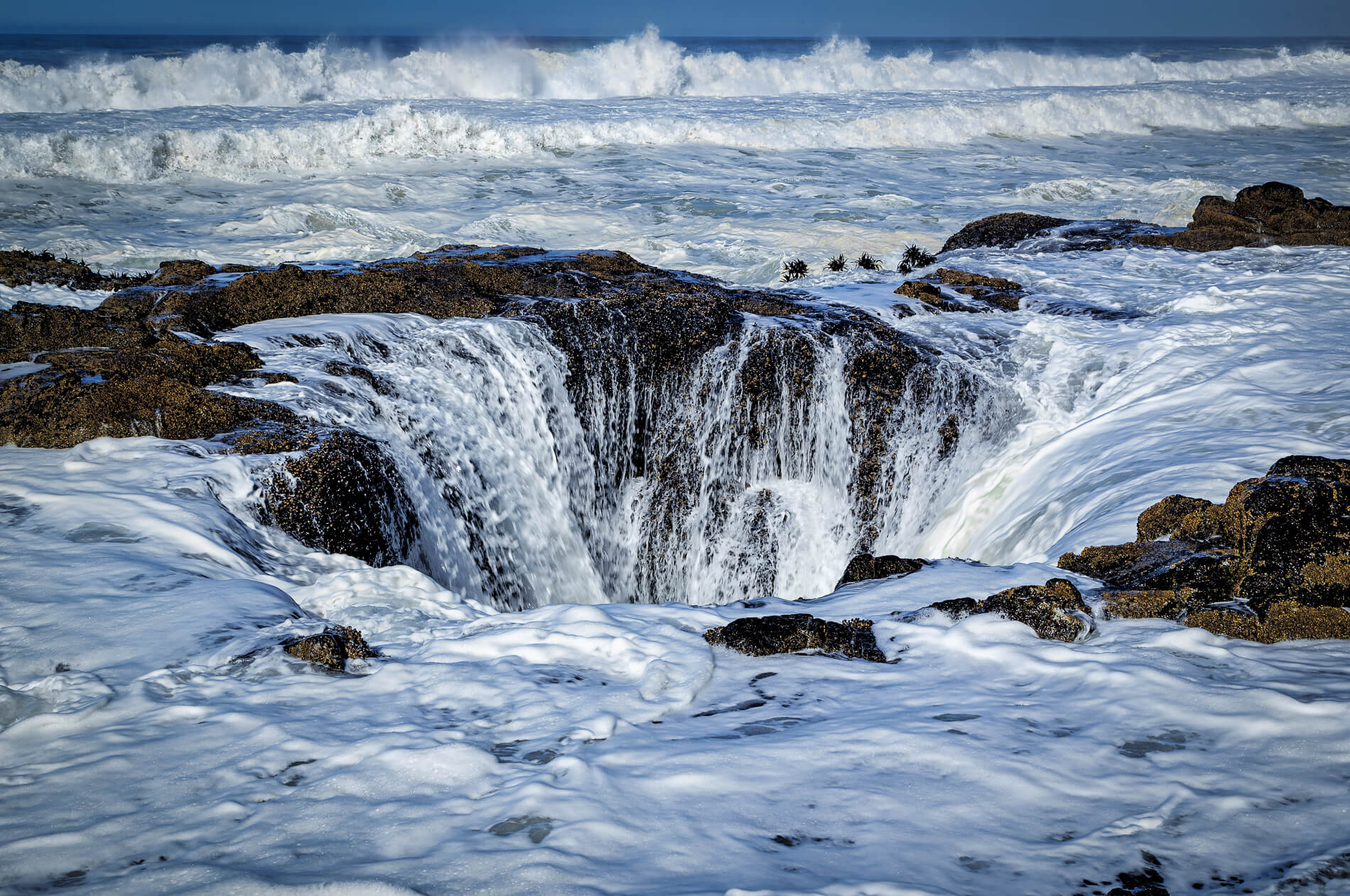 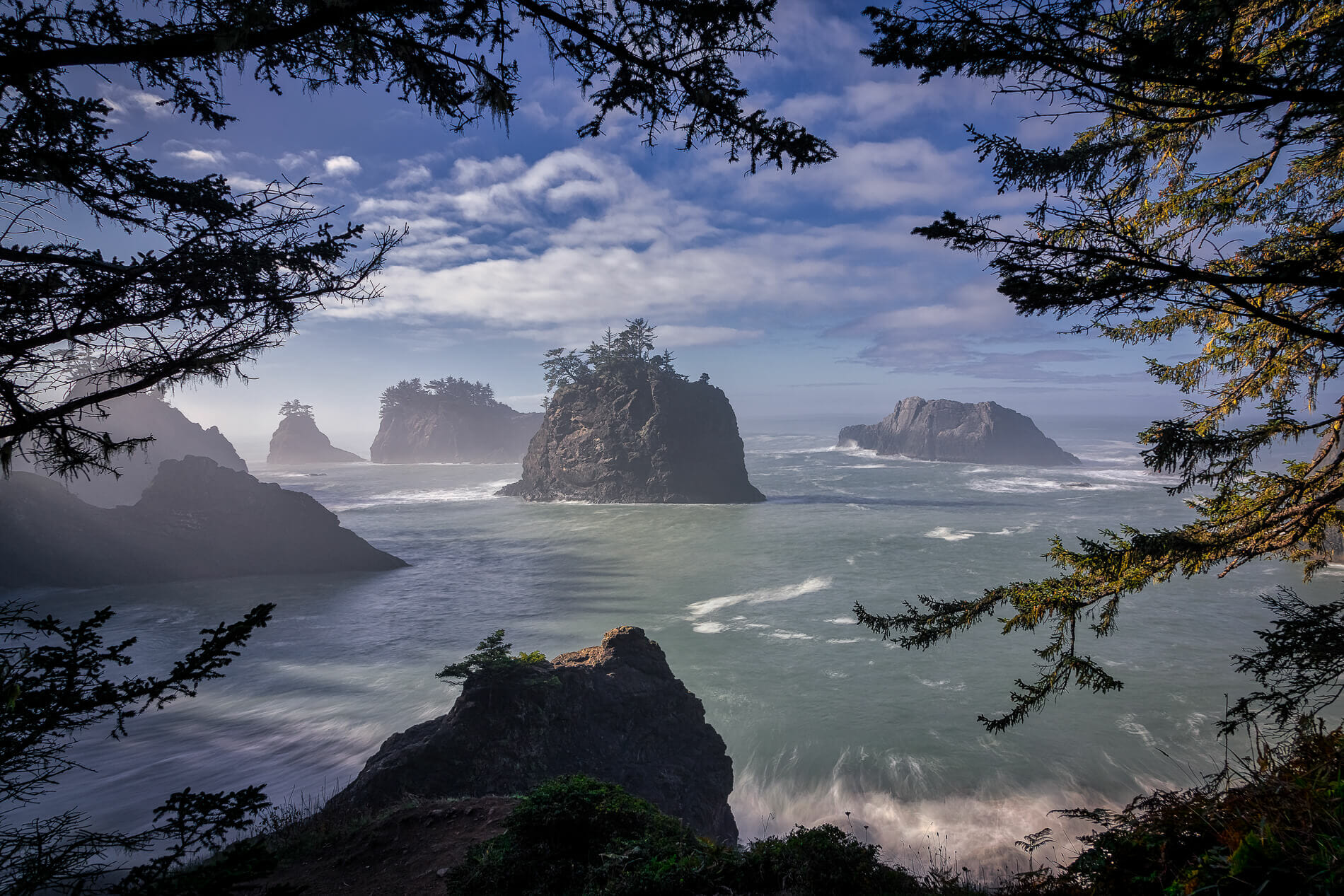 There are few places more photogenic than the rugged Oregon Coast. Lined with tempestuous seascapes, expansive sand dunes, hidden beaches, colorful tide pools, and rugged cliffs, there’s really no place like the Oregon Coast to experience the raw power of the Pacific Ocean! At the same time, the coastline can be immensely serene as you walk through old-growth forests, chase the tide in hidden coves, hike secluded beaches, or savor the view of a classic lighthouse.

Without a doubt, the Oregon coastline is one of the prettiest and most geographically diverse shores in the country. Perhaps the most photogenic stretch of the coast can be found along the Samuel H. Boardman Scenic Corridor between the towns of Brookings and Gold Beach. Known for its impressive sea stacks, natural arches, and rugged beaches, you’ll find waterfalls cascading down onto the beach, sea caves lined with anemone and starfish with a fraction of the crowds you’ll see up North.

A special highlight of this landscape adventure will be the time and focus given to Astrophotography and long exposures. We’ll learn how to plan an Astro and long exposure shoot, find suitable locations, and organize your camera gear. We’ll also spend time reviewing both the benefits and limitations of working with single exposures, how to create a composite from two exposures, and how to blend blue hour exposures with star stacked shots.

Our specific itinerary will be heavily influenced by two factors throughout the workshop: weather and the tide.

Weather conditions on the southern Oregon Coast can be very unpredictable. Likewise, almost all of these locations vary dramatically between high tide and low tide. While high tide tends to display the raw power of the ocean at its noisiest, angriest, and most rambunctious, low tide reveals the spectacular serenity and beauty of the region. Some of the locations we will photograph are only accessible during low tide while others are best photographed at high tide, e.g., you can access 4 additional beaches from Secret Beach when the tide is out.

In general, we will plan to spend 2 days along the Samuel H. Boardman Corridor; a day at Bandon Beach, Thor’s Well, and the Heceta Lighthouse; and a day photographing the Redwoods. However, please note that in order to capture some of these locations, we may need to make multiple trips at different times of the day to get the shots we want. A tentative itinerary will be forwarded as we get closer to the workshop date.

Samuel H. Boardman Scenic Corridor – This 12-mile stretch along the Oregon Coast is like a spectacular condensed version of the entire Oregon coast, meaning it’s got a little bit of everything! Gorgeous sea stacks, stunning viewpoints, and even sand dunes! This part of the Southern Oregon Coast also connects with 18 miles of The Oregon Coast Trail, an epic backpacking route that winds you through the craggy bluffs, sea stacks, and secluded beaches.

Bandon Beach – Bandon Beach is one of the most popular beaches on the Oregon Coast for photography. The beach is easy to access and enjoys some wonderfully shaped sea stacks. The main area for photography is a 1-mile stretch just south of the Face Rock State Scenic Viewpoint. There are several great sea stack shapes, with Merlin’s hat and Face Rock the most famous.

Thor’s Well – Thor’s Well has a great allure to landscape photographers. The combination of the raging sea and the silky flow of the ocean into what looks like a passage to the underworld makes for a great photograph. The hole that is Thor’s Well is really a collapsed sea cave (about 12-15 feet across) that sits near the edge of the sharp volcanic rock overlooking the Pacific Ocean. When the ocean tide is just right, the waves push up through the hole and cover the surrounding area. The waves are then swept back out of the sea cave to the ocean.

Heceta Lighthouse – The Heceta Head Lighthouse is a working lighthouse (that beams 21 miles out to sea) and it is the brightest light on the Oregon coast. It is said to be the most photographed lighthouse in the United States. There are also lots of good times to shoot this classic lighthouse: fogged in, the middle of the day, sunset, or just before dusk when the light is visible.

Our specific itinerary will be heavily influenced by two factors throughout the workshop: weather and the tide. While the schedules for sunrise, sunset, and low/high tide are easy to identify, weather conditions on the southern Oregon Coast can be very unpredictable. We’ll start with a tentative schedule for the workshop, but we will need to be flexible and adaptive to changing weather conditions.

The majority of our days will start early, before sunrise. After a quick cup of coffee or tea, we’ll be off to get into position at a location in the best light of the day with breakfast in the field in order to maximize our shooting time. We’ll often continue until mid-to-late morning before heading back to Basecamp.

Back at Basecamp, we’ll have time for off-loading memory cards, classroom lectures & instruction, working on our images, one-on-one guidance, or time to relax. Then, in the mid-to-late afternoon, we’ll head out again to capture the evening skies, getting the most out of the sunset and/or shooting the stars in the night sky.

More important than just getting you to some of the best and most remote areas at the best times of the day, this five-day landscape photography workshop will challenge you to take your photography to the next level and to develop your own photographic voice.

Out in the field, we’ll explore different approaches to scene visualization, ground/sky/sea compositions, and how to manage complex highlight and shadow scenes using techniques such as dynamic bracketing, focus stacking, framing, and neutral density filters.

In the classroom, we’ll spend time developing your post-production workflow – learning when Lightroom is enough and when you need to move your work into Photoshop – using techniques such as luminosity masks to create and solve contrast, color, and blending issues.

You’ll benefit from our guidance, hours of capture time in the field with an instructor by your side, and classroom instruction as you learn new techniques and strategies for creating dynamic images. We’ll help you take your photography to the next level.

What’s Included in Your Tuition:

What’s Not Included in Your Tuition:

1 review for The Seascapes of the Rugged Oregon Coast